A Complete State Machine Made With HTML Checkboxes and CSS

State machines are typically expressed on the web in JavaScript and often through the popular XState library. But the concept of a state machine is adaptable to just about any language, including, amazingly, HTML and CSS. In this article, we’re going to do exactly that. I recently built a website that included a “no client JavaScript” constraint and I needed one particular unique interactive feature.

The key to all this is using <form> and <input type="radio"> elements to hold a state. That state is toggled or reset with another radio <input> or reset <button> that can be anywhere on the page because it is connected to the same <form> tag. I call this combination a radio reset controller, and it is explained in more detail at the end of the article. You can add more complex state with additional form/input pairs.

It’s a little bit like the Checkbox Hack in that, ultimately, the :checked selector in CSS will be doing the UI work, but this is logically more advanced. I end up using a templating language (Nunjucks) in this article to keep it manageable and configurable.

Traffic lights aren’t the most practical every-day UI. How about a <table> instead?

There are two states (A and B) that are changed from two different places in the design that affect changes all over the UI. This is possible because the empty <form> elements and <input> elements that hold state are at the very top of the markup and thus their state can be deduced with general sibling selectors and the rest of the UI can be reached with descendent selectors. There is a loose coupling of UI and markup here, meaning we can change the state of almost anything on the page from anywhere on the page. 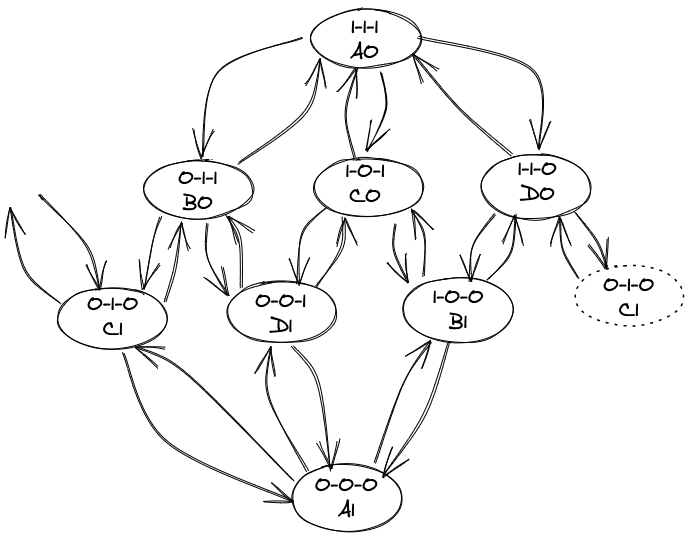 Diagram of the controller’s internal states

The “machine states” are written as a combination of the three radio buttons (i.e. M001 or M101). To transition from the initial M111 to M011, the radio button for that bit is unset by clicking on another radio <input> in the same group. To transition back, the reset <button> for the <form> attached to that bit is clicked which restores the default checked state. Although this machine has eight total states, only certain transitions are possible. For instance, there is no way to go directly from M111 to M100 because it requires two bits to be flipped. But if we fold these eight states into four states so that each page state shares two machine states (i.e. A shares states M111 and M000) then there is a single transition from any page state to any other page state.

For reusability, the component is built with Nunjucks template macros. This allows it to be dropped into any page to add a state machine with the desired valid states and transitions. There are four required sub-components:

The controller is built with three empty form tags and three radio buttons. Each of the radio buttons checked attribute is checked by default. Each button is connected to one of the forms and they are independent of each other with their own radio group name. These inputs are hidden with display: none because they are are not directly changed or seen. The states of these three inputs comprise the machine state and this controller is placed at the top of the page.

The logic that connects the controller above to the state of the page is written in CSS. The Checkbox Hack uses a similar technique to control sibling or descendant elements with a checkbox. The difference here is that the button controlling the state is not tightly coupled to the element it is selecting. The logic below selects based on the “checked” state of each of the three controller radio buttons and any descendant element with class .M000. This state machine hides any element with the .M000 class by setting display: none !important. The !important isn’t a vital part of the logic here and could be removed; it just prioritizes the hiding from being overridden by other CSS.

Changing the state of the page requires a click or keystroke from the user. To change a single bit of the machine state, the user clicks on a radio button that is connected to the same form and radio group of one of the bits in the controller. To reset it, the user clicks on a reset button for the form connected to that same radio button. The radio button or the reset button is only shown depending on which state they are in. A transition macro for any valid transition is added to the HTML. There can be multiple transitions placed anywhere on the page. All transitions for states currently inactive will be hidden.

The three components above are sufficient. Any element that depends on state should have the classes applied to hide it during other states. This gets messy. The following macros are used to simplify that process. If a given element should be shown only in state A, the {{showA()}} macro adds the states to hide.

Putting it all together

The markup for the traffic light example is shown below. The template macros are imported in the first line of the file. The CSS logic is added to the head and the controller is at the top of the body. The state classes are on each of the lights of the .traffic-light element. The lit signal has a {{showA()}} macro while the “off” version of signal has the machine states for the .M000 and .M111 classes to hide it in the A state. The state transition button is at the bottom of the page.

The state machine component here includes up to four states which is sufficient for many use cases, especially since it’s possible to use multiple independent state machines on one page.

That said, this technique can be used to build a state machine with more than four states. The table below shows how many page states can be built by adding additional bits. Notice that an even number of bits does not collapse efficiently, which is why three and four bits are both limited to four page states.

The trick to being able to show, hide, or control an HTML element anywhere on the page without JavaScript is what I call a radio reset controller. With three tags and one line of CSS, the controlling button and controlled element can be placed anywhere after this controller. The controlled side uses a hidden radio button that is checked by default. That radio button is connected to an empty <form> element by an ID. That form has a type="reset" button and another radio input that together make up the controller.

This shows a minimal implementation. The hidden radio button and the div it controls need to be siblings, but that input is hidden and never needs to be directly interacted with by the user. It is set by a default checked value, cleared by the other radio button, and reset by the form reset button.

Only two line of CSS are required to make this work. The :checked pseudo selector connects the hidden input to the sibling it is controlling. It adds the radio input and reset button that can be styled as a single toggle, which is shown in the following Pen:

Accessibility… should you do this?

This pattern works, but I am not suggesting it should be used everywhere for everything. In most cases, JavaScript is the right way to add interactivity to the web. I realize that posting this might get some heat from accessibility and semantic markup experts. I am not an accessibility expert, and implementing this pattern may create problems. Or it may not. A properly labelled button that does something to the page controlled by otherwise-hidden inputs might work out fine. Like anything else in accessibility land: testing is required.

Also, I have not seen anyone else write about how to do this and I think the knowledge is useful — even if it is only appropriate in rare or edge-case situations.

Many users these days expect instant feedback in form validation. How do you achieve this level of interactivity when you’re building a small static site

How To Redirect URLs in WordPress

If you don’t want to work directly with your site’s .htaccess file, a simpler option is to use a WordPress redirection plugin. These plugins let