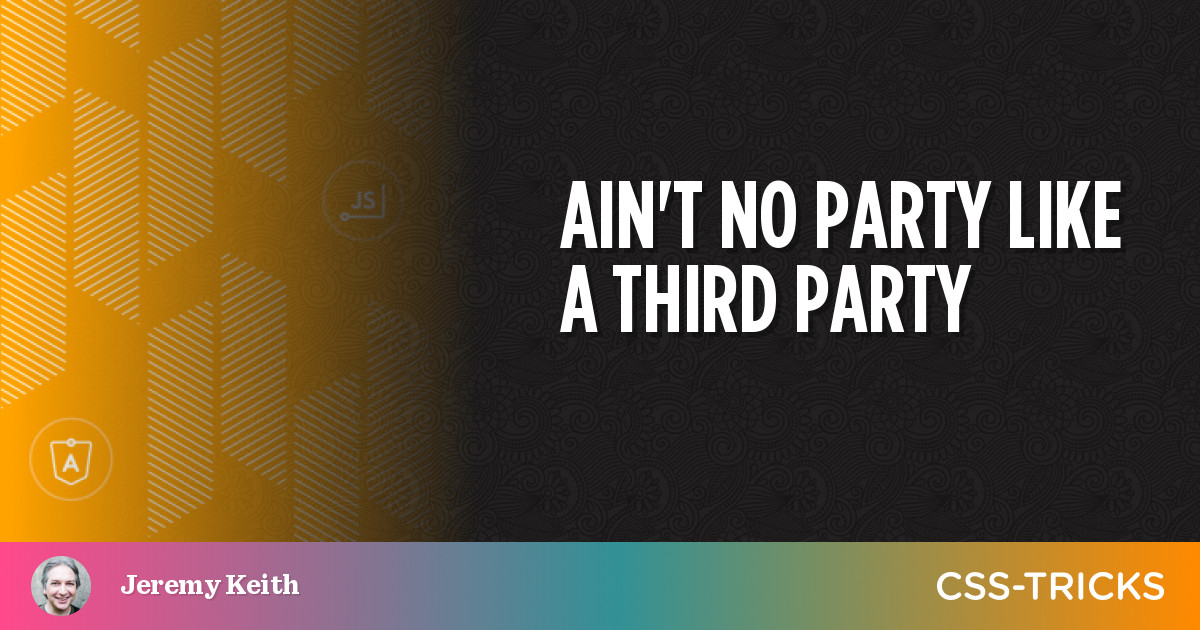 I’d like to tell you something not to do to make your website better. Don’t add any third-party scripts to your site.

That may sound extreme, but at one time it would’ve been common sense. On today’s modern web it sounds like advice from a tinfoil-hat-wearing conspiracy nut. But just because I’m paranoid doesn’t mean they’re not out to get your user’s data.

Browsers are now beginning to block third-party cookies. Chrome is dragging its heels because the same company that makes the browser also runs an advertising business. But even they can’t resist the tide. Third-party cookies are used almost exclusively for tracking. That was never the plan.

In the beginning, there was no state on the web. A client requested a resource from a server. The server responded. Then they both promptly forgot about it. That made it hard to build shopping carts or log-ins. That’s why we got cookies.

In hindsight, cookies should’ve been limited to a same-origin policy from day one. That would’ve solved the problems of authentication and commerce without opening up a huge security hole that has been exploited to track people as they moved from one website to another. The web went from having no state to having too much.

Now that vulnerability is finally being closed. But only for cookies. I would love it if third-party JavaScript got the same treatment.

When you add any third-party file to your website—an image, a stylesheet, a font—it’s a potential vector for tracking. But third-party JavaScript files go one further. They can execute arbitrary code.

Just take a minute to consider the implications of that: any third-party script on your site is allowing someone else to execute code on your web pages. That’s astonishingly unsafe.

It gets better. One of the pieces of code that this invited intruder can execute is the ability to pull in other third-party scripts.

You might think there’s no harm in adding that one little analytics script. Or that one little Google Tag Manager snippet. It’s such a small piece of code, after all. But in doing that, you’ve handed over your keys to a stranger. And now they’re welcoming in all their shady acquaintances.

Request Map Generator is a great tool for visualizing the resources being loaded on any web page. Try pasting in the URL of an interesting article from a news outlet or magazine that someone sent you recently. Then marvel at the sheer size and number of third-party scripts that sneak in via one tiny script element on the original page.

That’s why I recommend that the one thing people can do to make their website better is to not add third-party scripts.

Easier said than done, right? Especially if you’re working on a site that currently relies on third-party tracking for its business model. But that exploitative business model won’t change unless people like us are willing to engage in a campaign of passive resistance.

I know, I know. If you refuse to add that third-party script, your boss will probably say, “Fine, I’ll get someone else to do it. Also, you’re fired.”

So I think I’d like to change my answer to the question that’s been posed.

The one thing people can do to make their website better is to unionize.

How Do You Handle Component Spacing in a Design System?

Say you’ve got a <Card /> component. It’s highly likely it shouldn’t be butted right up against any other components with no spacing around it.

WordPress 5.9 takes the first step towards Full Site Editing. It includes a new editor (in beta), which lets you edit visually the templates for

How to Make a Scroll-Triggered Animation With Basic JavaScript

A little bit of animation on a site can add some flair, impress users, and get their attention. You could have them run, no matter