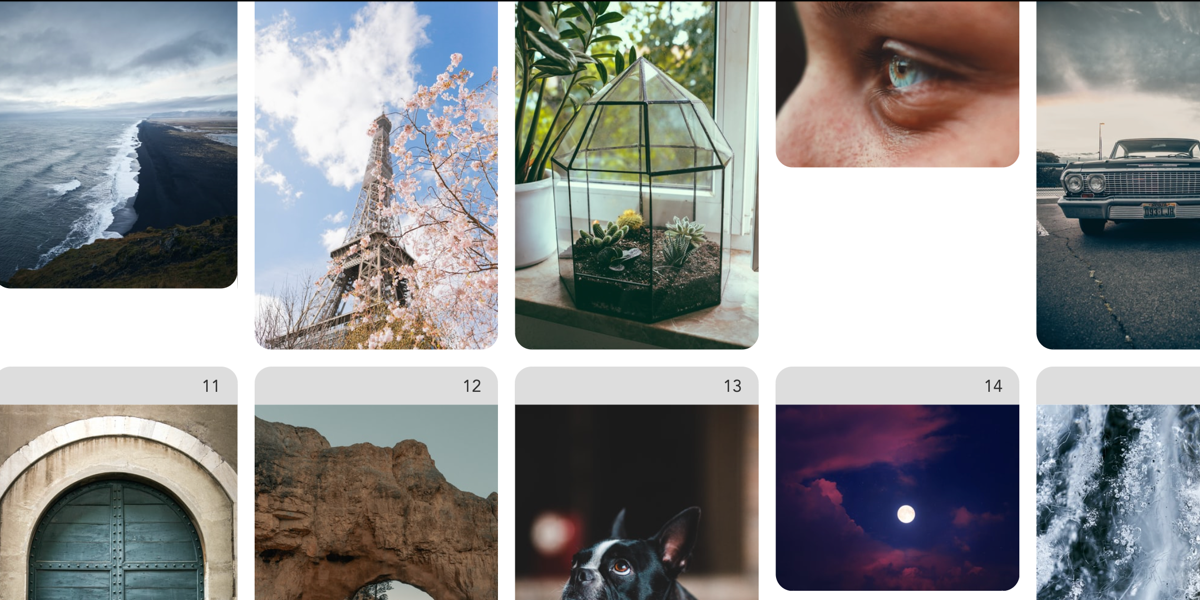 It’s not at the level of demand as, say, container queries, but being able to make “masonry” layouts in CSS has been a big ask for CSS developers for a long time. Masonry being that kind of layout where unevenly-sized elements are layed out in ragged rows. Sorta like a typical brick wall turned sideways.

The layout alone is achievable in CSS alone already, but with one big caveat: the items aren’t arranged in rows, they are arranged in columns, which is often a deal-breaker for folks.

If you want that ragged row thing and horizontal source order, you’re in JavaScript territory. Until now, that is, as Firefox rolled this out under a feature flag in Firefox Nightly, as part of CSS grid.

An implementation of this proposal is now available in Firefox Nightly. It is disabled by default, so you need to load about:config and set the preference layout.css.grid-template-masonry-value.enabled to true to enable it (type “masonry” in the search box on that page and it will show you that pref).

Is this really a grid?

A bit of pushback from Rachel Andrew…

Grid isn’t Masonry, because it’s a grid with strict rows and columns. If you take another look at the layout created by Masonry, we don’t have strict rows and columns. Typically we have defined rows, but the columns act more like a flex layout, or Multicol. The key difference between the layout you get with Multicol and a Masonry layout, is that in Multicol the items are displayed by column. Typically in a Masonry layout you want them displayed row-wise.

Speaking personally, I am not a huge fan of this being part of the Grid specification. It is certainly compelling at first glance, however I feel that this is a relatively specialist layout mode and actually isn’t a grid at all. It is more akin to flex layout than grid layout.

By placing this layout method into the Grid spec I worry that we then tie ourselves to needing to support the Masonry functionality with any other additions to Grid.

None of this is final yet, and there is active CSS Working Group discussion about it.

This is an experimental implementation — being discussed as a possible CSS specification. It is NOT yet official, and likely will change. Do not write blog posts saying this is definitely a thing. It’s not a thing. Not yet. It’s an experiment. A prototype. If you have thoughts, chime in at the CSSWG.

Last time there was chatter about native masonry, it was mingled with idea that the CSS Layout API, as part of Houdini, could do this. That is a thing, as you can see by opening this demo (repo) in Chrome Canary.

I’m not totally up to speed on whether Houdini is intended to be a thing so that ideas like this can be prototyped in the browser and ultimately moved out of Houdini, or if the ideas should just stay in Houdini, or what.

I’ve been toying around with some ideas for how to use custom properties (aka CSS variables) for global settings in a project. The idea is

In 2016 I did my first presentation on Amazon Alexa and Echo, and at the time there were about 700 skills available.  Today there are

Many developers are at least marginally familiar with AWS Lambda functions. They’re reasonably straightforward to set up, but the vast AWS landscape can make it

Small businesses across America are beginning to reopen and re-emerge from their imposed shutdown orders. It’s been a long and very difficult road for many.

Most people know they have personal credit scores. But not all entrepreneurs are aware that they may have a separate business credit score as well.

Elementor is undoubtedly one of the best page builders out there. It offers a vast ecosystem and enables you to customize your site to your