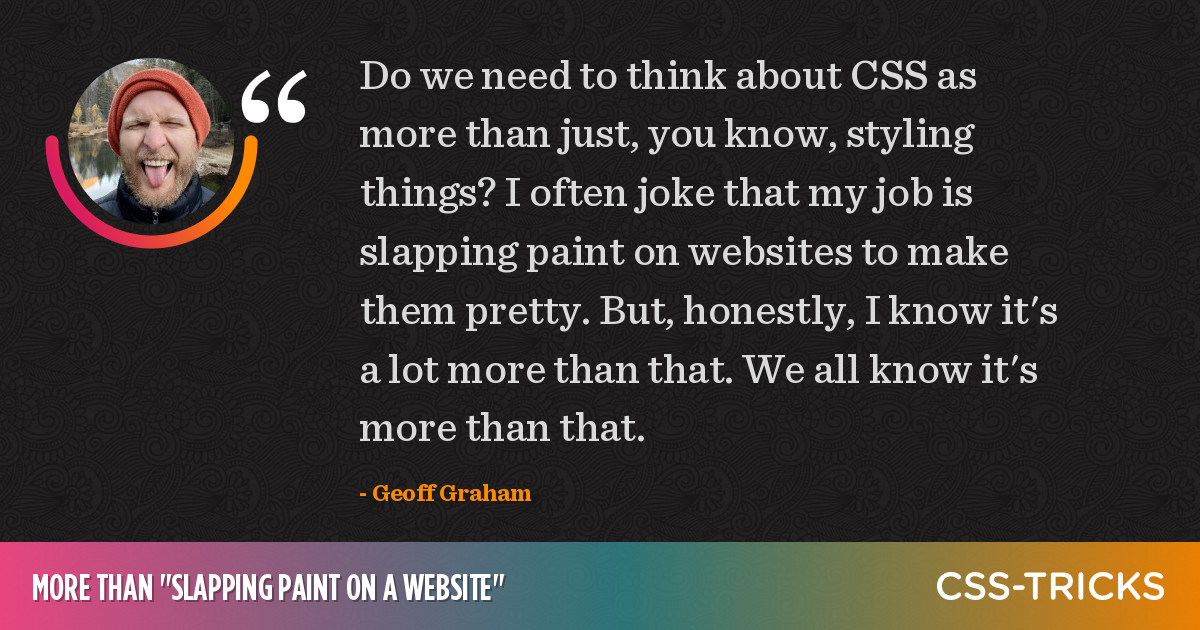 I’m a sucker for anything about front-end job titles.

CSS evolved and we’re beyond the point where everyone can just do it as a side interest. We all can learn it and build amazing stuff with it, but using it wisely and correctly in a large-scale context isn’t an easy job anymore. It deserves people whose work is to focus on that part of the code.

Anselm is partly in responding to Sacha Greif’s “Is There Too Much CSS Now?” and the overall sentiment that CSS has a much higher barrier to entry for those learning it today than it did, say, in the CSS3 days. Back then, there was a super direct path to see the magic of CSS. Rachel Andrew perfectly captures that magic feeling in a prescient post from 2019:

There is something remarkable about the fact that, with everything we have created in the past 20 years or so, I can still take a complete beginner and teach them to build a simple webpage with HTML and CSS, in a day. […] We just need a text editor and a few hours. This is how we make things show up on a webpage.

Rachel is speaking to the abstraction of frameworks on top of vanilla CSS (and HTML) but you might as well tack big, shiny, and fairly new features on there, like CSS grid, flexbox, container queries, cascade layers, custom properties, and relational pseudo-classes, to name a few. Not that those are abstractions, of course. There’s just a lot to learn right now, whether you’ve been writing CSS for 20 days or 20 years.

But back to Anselm’s post. Do we need to think about CSS as more than just, you know, styling things? I often joke that my job is slapping paint on websites to make them pretty. But, honestly, I know it’s a lot more than that. We all know it’s more than that.

Maybe CSS is an industry in itself. Think of all the possible considerations that have to pass through your brain when writing CSS rules. Heck, Ahmad Shadeed recently shared all the things his brain processes just to style a Hero component. CSS touches so much of the overall user experience — responsiveness, accessibility, performance, cross-browser, etc. — that it clearly goes well beyond “slapping paint on websites”. So far beyond that each of those things could be someone’s full-time gig, depending on the project.

So, yes, CSS has reached a point where I could imagine seeing “CSS Engineer” on some job board. As Anselm said, “[CSS] deserves people whose work is to focus on that part of the code.” Seen that way, it’s not so hard to imagine front-end development as a whole evolving into areas of specialization, just like many other industries.