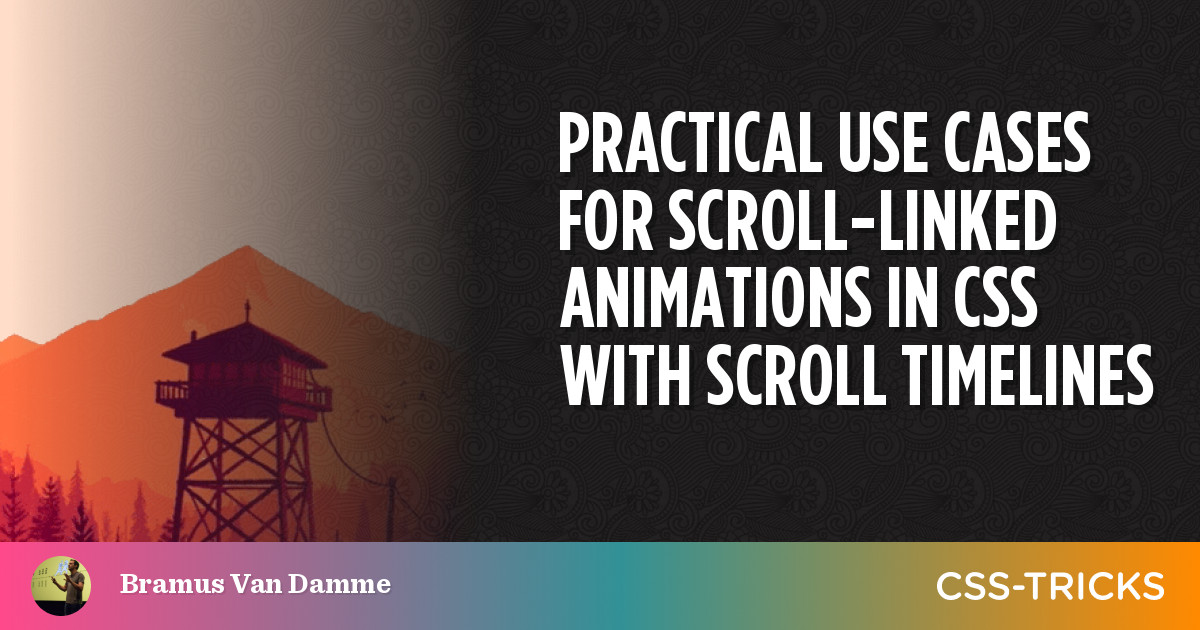 The Scroll-Linked Animations specification is an upcoming and experimental addition to CSS. Using the @scroll-timeline at-rule and animation-timeline property this specification provides you can control the time position of regular CSS Animations by scrolling.

In this post, we take a look at some practical use cases where scroll-linked animations come in handy, replacing a typical JavaScript approach.

👨‍🔬 The CSS features described in this post are still experimental and not finalized at all. The are not supported by any browser at the time of writing, except for Chromium ≥ 89 with the “Experimental Web Platform Features” flag enabled.

With CSS Scroll-Linked Animations, you can drive a CSS animation by scroll: as you scroll up or down inside a scroll container, the linked CSS animation will advance or rewind. Best of all is that this is all running off main thread, on the compositor.

To implement a basic scroll-linked animation you need three things:

This is a regular CSS Animation like we already know:

As you normally do, attach it to an element using the animation property:

The scroll timeline allows us to map the scroll distance to the animation progress. In CSS, we describe this with the CSS @scroll-timeline at-rule.

This at-rule consists of descriptors, including:

A previous version of the specification required you to also set a time-range descriptor. This descriptor has been removed and will automatically take over the animation-duration from the linked animation. You may still see traces of it in the demos, but you can safely ignore it.

A link between both

To associate our @scroll-timeline with our CSS animation, we use the new animation-timeline CSS property, and have it refer to the timeline’s name.

With that set up the adjust-progressbar animation won’t run by itself on page load, but will only advance as we scroll down the page.

For a more in-depth introduction to @scroll-timeline please refer to Part 1 and Part 2 of my series on Scroll-Linked Animations.

The first post looks at each descriptor in more detail, explaining them with an example to go along with them, before covering many more interesting demos.

The second post digs even deeper, looking into Element-Based Offsets, which allow us to drive an animation as an element appears into and disappears from the scrollport as we scroll.

Apart from the progress bar demo above, there are a few more use cases or scenarios where scroll-linked animations can replace a solution typically implemented using JavaScript.

A typical use case for Scroll-Linked Animations is a parallax effect, where several sections of a page seem to have a different scrolling speed. There’s a way to create these type of effects using only CSS, but that requires mind-bending transform hacks involving translate-z() and scale().

Inspired upon the Firewatch Header—which uses the mentioned transform hack—I created this version that uses a CSS scroll timeline:

Compared to the original demo:

Each different layer uses the same scroll timeline: scroll over a distance of 100vh.

What’s different between layers is the distance that they move as we scroll down:

As the foremost layers move over a greater distance, they appear to move faster than the lower layers, achieving the parallax effect.

By default, the image is given an opacity of 0 and is masked using a clip-path:

In the end-state we want the image to be fully visible, so we sent the end-frame of our animation to reflect that:

By using element-based offsets as our scroll timeline offsets, we can have it so that our reveal animation only starts when the image itself slides into view.

😵 Can’t follow with those element-based offsets? This visualization/tool has got you covered.

As CSS scroll timelines can be linked to any existing CSS animation, you can take any CSS Animation demo and transform it. Take this typing animation for example:

With the addition of a scroll timeline and the animation-timeline property, it can be adjusted to “type on scroll”:

Note that to create some scroll-estate the <body>was also given a height of 300vh.

Using a different animation, the code above can easily be adjusted to create a zoom on scroll effect:

I can see these two working great for article intros.

One of the components of a carousel (aka slider) is an indicator that exposes how many slides it contains, as well as which slide is currently active. This is typically done using bullets.

This again is something we will be able to achieve using a CSS scroll timeline, as shown in this demo created by Fabrizio Calderan:

The active state bullet is injected via .slider nav::before and has an animation set that moves it over the other bullets

By attaching a @scroll-timeline onto the slider, the dot that indicates the active state can move as you scroll:

The dot only moves after the slide has snapped to its position thanks to the inclusion of a steps() function in the animation. When removing it, it becomes more clear how the dot moves as you scroll

💡 This feels like the final missing piece to Christian Shaefer’s CSS-only carousel.

Unlike the carousel indicators demo from above we can’t simply get there by moving a single dot around, as it’s the texts in the ToC that get adjusted. To approach this situation, we need to attach two animations onto each element in the ToC:

As we have two animations, we also need to create two scroll timelines, and this for each section of the content. Take the #introduction section for example:

Once both of these timelines are linked to both animations, everything will work as expected:

I hope I have convinced you of the potential offered by the CSS Scroll-linked Animations specification. Unfortunately, it’s only supported in Chromium-based browsers right now, hidden behind a flag.

Given this potential, I personally hope that—once the specification settles onto a certain syntax—other browser vendors will follow suit. If you too would like to see Scroll-Linked Animations land in other browsers, you can actively star/follow the relevant browser issues.

By actively starring issues, us developers can signal our interest into these features to browser vendors.

This is a warning about the ToolKit For Elementor plugin so that you may be aware and save yourself some time and money. I purchased

Plugin conflicts can arise for a whole range of reasons, mainly when one or more plugins on your site don’t adhere to the latest coding

Web Features That May Not Work As You’d Expect

As the web gets more and more capable, developers are able to make richer online experiences. There are times, however, where some new web capabilities

Road testing petite-vue with a simple category filter July 21, 2021 petite-vue is a new cut of the Vue project specifically built with progressive enhancement